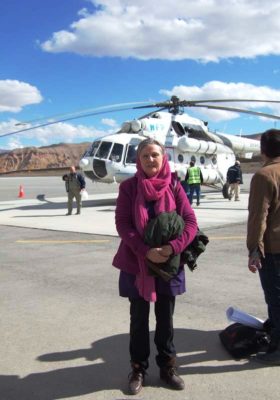 Interview and translation by Alice Binnington – Action for Development – Aug 2021

Kerry Jane Wilson has worked in developing countries for 35 years. We were pleased to talk to her about her memories of working in Afghanistan, where she worked on community development and founded Zardozi, an NGO that helps women to support themselves financially through business endeavours.

Can you tell us a little bit about your background? Or introduce yourself?

I’m Kerry Jane Wilson. I was in Bangladesh for 16 years. Then I worked in Afghanistan from Pakistan and then from Afghanistan for 20 years. In 2016 I was careless enough to get kidnapped and after that I had to leave Afghanistan; since then I’ve been here in Perth!

When did you discover Afghanistan and in which context?

I was working way up in the north in the Hindu Kush mountains. In Afghanistan there was so much that you couldn’t see. It was a very steep learning curve for me, to understand how poverty actually manifested itself. It’s a culture of so many opposites. There’s so much care for family and for poor people, but on the other hand, the rules of the culture are so harsh, so unforgiving, so uncompromising. And the whole gender issue, you know, that was just enormous: it just covered everything. Afghanistan has never been a safe place. Everywhere I went I had to be surrounded by men, and that meant that you never saw any women. It was a long time before I actually came to understand the lives of women in Afghanistan.

Can you tell us about your experience working with Community Development programs?

Afghanistan is a very hierarchical society with an enormous respect for education and learning, and for age. So anything like inclusive community development is going to be completely outside the understanding of the educated afghan people who have been recruited to run a project. I was running into comments like, “Ask the villagers what engineering project they want?! Why would I do that?! They’re not engineers, how would they know?!”. It took a long time. They were not listening, believe me.

On the other hand, if you want to know what is needed in this village, you can’t just barge in there and ask them if they don’t know you and you don’t know them. If you ask them what their problems are, and what they think can be done to solve their problems, that’s really the only way. Maybe they need a potato go-down to store their potatoes for the winter. You’ve got to have ideas yourself. You have to understand their situation so you can say to them, “Yes, yes, I know that your health situation is really terrible, but what happens in the winter? What do you do with your potatoes?” You’ve got to have a lot of information before you can go in. It’s so common that people spend money on projects which are not used!

Did you see a real impact on the lives of the people you worked with?

20 years ago when I was working with AfghanAid, we built a road into a village. The babies and the old people didn’t use to survive the winter. Because it’s -20℃ and they’re very high in the mountains so they didn’t have enough wheat for the winter. Wheat came in but they had to carry it, 50kg per person, on their backs, through the snow, for four or five days. So they were eating ground mulberries, which have got no protein, no nothing, it’s just sugar. So we built this road in, and wheat could be trucked in for most of the winter, and the whole population was surviving the winter!

In the NGO that I set up later (Zardozi), we were working with women, showing them how to earn an income. You could see very clearly how the lives of individual women were changed, thousands of them, by having their own income! Some women were just earning five dollars a month. I remember saying to one of the staff, “What is the use of her earning five dollars a month?”. This lady looked at me and was annoyed with me. She said, “That lady waits until her husband is out, and she uses that five dollars to take herself to the clinic and get family planning. And her husband doesn’t know. It has changed her life.”

At AfD we look at education as well as the place of women, so I am interested in your work as the Director of Zardozi. Can you tell us what led you to this field?

The frustration (she laughs) of a decade of working with Afghan men, lovely though they were, and not being able to talk to any women! In the end, there was nothing for it but to go and set up an organisation that was run by women so that we could go and talk to women. We had to find what their problems really were, what was going to support them to become business-women. You have to do confidence building with them, but mainly you couldn’t train them and leave them. Because when you think about the low position that they’re starting from, in terms of how oppressed they are, how hostile the business environment is to them, how many social norms there are that they’re going to have to push the boundaries of to even leave the house… There’s no enabling environment for business-people, never mind women. The way that men manage to start a business is through their own networks. That provides them with credit and expertise, and the networks in the Afghan market are very secretive. You can’t just go and start something. All these male networks are never going to allow women in. Once we worked out how to do it, it was amazing, and so frustrating to see how simple other people thought it was!

Do you have a dream, hope or vision for Afghanistan?

Peace. A peace can include the Taliban. But let us have a government which is at least acceptable to the international community, so that Afghanistan is not a pariah the way it was in the days when even international flights didn’t fly over the top of Afghanistan. It was as though Afghanistan didn’t exist. At least that’s a start, isn’t it? From there you can work forward.