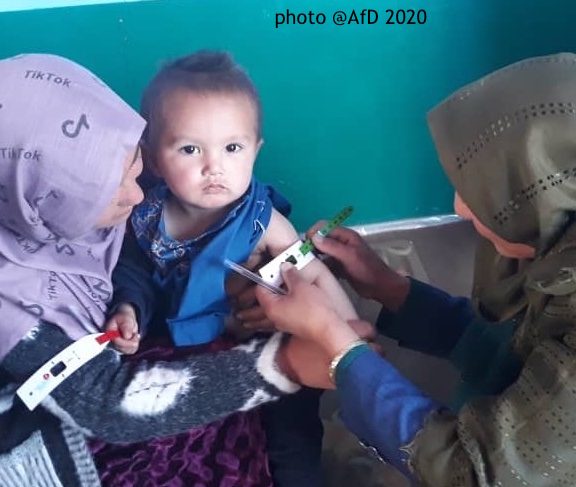 (Original article by Alison Farnham, Action for Development, for the SUN Movement website, adapted for use on the SOAM website, creating a page for Afghanistan)

Afghanistan is one of the poorest countries in the world. Since the Soviet invasion in 1979, the country has suffered through more than four decades of conflicts that have taken an incalculable toll on the country’s economic infrastructure and resulted in widespread poverty. According to figures by the Ministry of Economy of Afghanistan and a recent UNDP report on implications of COVID-19 on the economy of Afghanistan, 55% of the country’s population currently lives below the national poverty line and another 20% is highly vulnerable to the risk of falling into poverty.

Although Afghanistan has achieved considerable progress in tackling malnutrition, it remains a national challenge and according to the Global Nutrition Report 2020, the country is off course to meet the Global Targets. Afghanistan has one of the world’s highest rates of stunting in children under-5 years old; 40.9% are stunted and 9.5% are wasted. In Afghanistan today, 14.7 million people are estimated to be living in acute food insecurity, with an estimated 2 million children under the age of 5 affected by acute malnutrition.

The Family MUAC approach is one of UNICEF and the Global Nutrition Cluster Technical Alliance (formerly GTAM) priority actions to support preparation and response to acute malnutrition in the context of COVID-19, see the March 27th guidance brief for the Management of Child Wasting in the context of COVID-19, ’Priority Action 4; Intensify efforts to strengthen the capacity of mothers and caregivers to detect and monitor their children’s nutritional status using low-literacy/numeracy tools including Mid-Upper Arm Circumference (MUAC) tapes. Additionally, Family MUAC is a recommended measure to ensure continuity and safety of routine services for the early detection and treatment of child wasting in the context of COVID-19 in the WHO/UNICEF Implementation Guidance for Wasting in Children in COVID-19.

Afghanistan has been using CHWs for decades to address the shortage of skilled health professionals, especially in rural areas. Community health workers are the first point of contact for patients in rural and remote areas and are responsible for implementing the Basic Package of Health Services at health posts, serving as village primary care providers. Given their pivotal role in rural health care, Afghanistan has expanded its programme in the last decade, doubling its CHWs from 20 000 in 2011 to 40 000 in 2016 (of which 50% are female). Today, CHWs make up almost 50% of the health workforce in Afghanistan. By providing CHWs with this training, they are both aware of the latest information regarding Covid-19 and they can continue to train mothers in Family MUAC in their communities after the training session, whether in groups or individually.

Under the no-cost extension of the SUN Pooled Fund Project Afghanistan, Action for Development (AfD) developed a project to train CHWs in Family MUAC in 5 provinces in Afghanistan – Panjsher, Kabul, Dykundi, Bamyan, Jawzjan – selecting several districts in each province where training in Family MUAC will be provided to caregivers and female Community health workers (CHWs). CHWs in Afghanistan work as a male-female couple and are based in a health post, serving a population of 1000-1500 per pair. They carry critical health knowledge, skills and tools into communities and homes and are the first point of contact with the health system for many Afghans. As CHWs work voluntarily, this programme will offer a cash incentive of the equivalent of 10usd per CHW to be paid on completion of the training.

As well as the Family MUAC training, AfD will be providing training using counselling card materials for CHWs. These counselling cards have been adapted by UNICEF Afghanistan for the local context to ensure that CHWs are up to date with recommended practices for infant and young child feeding adapted to the COVID-19 context.

After development, the project was presented to nutrition partners in Afghanistan at the monthly Nutrition Cluster meeting in August. Preparation for project implementation began the following month at AfD’s country office in Kabul, where four female health workers received ‘Training of Trainers’ training in Family MUAC from Dr Dashti of the Ministry of Health’s Public Nutrition Department (PND).

These four trainers will travel to the provinces alongside Master Trainer Dr Zabihullah Rahimi, where between October and December 2020, they will train 500 CHWs and approximately 200 caregivers in the Family MUAC method.

The expected outcome of the training is to support uptake of routine services for the early detection and treatment of child wasting in the context of COVID-19.

In mid-October, the team of trainers travelled from Kabul to Bamyan province where they embarked on the first training sessions. Training was provided to 120 CHWs and 40 caregivers over eight health facilities in three districts. Heads of clinics and Community Health Supervisers (CHS) also joined the training sessions. MUAC tapes were distributed and each trained CHW received a copy of the IYCF counselling cards.

Next the team travelled to Dykundi province where they noted that the long distances to be covered between health facilities was a challenge. The team was able to provide training to 120 CHWs and 45 caregivers in three districts despite the distances. Ten volunteers from a health in the community group also joined the training. The CHWs and CHS noted the need for Family MUAC training in other districts of Dykundi in order to combat high levels of malnutrition. Caregivers gave very positive feedback regarding the MUAC tapes, stating that they must travel long distances to access health facilities so they welcomed the ability to take measurements of their children at home.

The next Family MUAC training sessions will take place in Jawzjan, Panjsher and finally Kabul provinces.

Inclusion and Education: the impact on girls