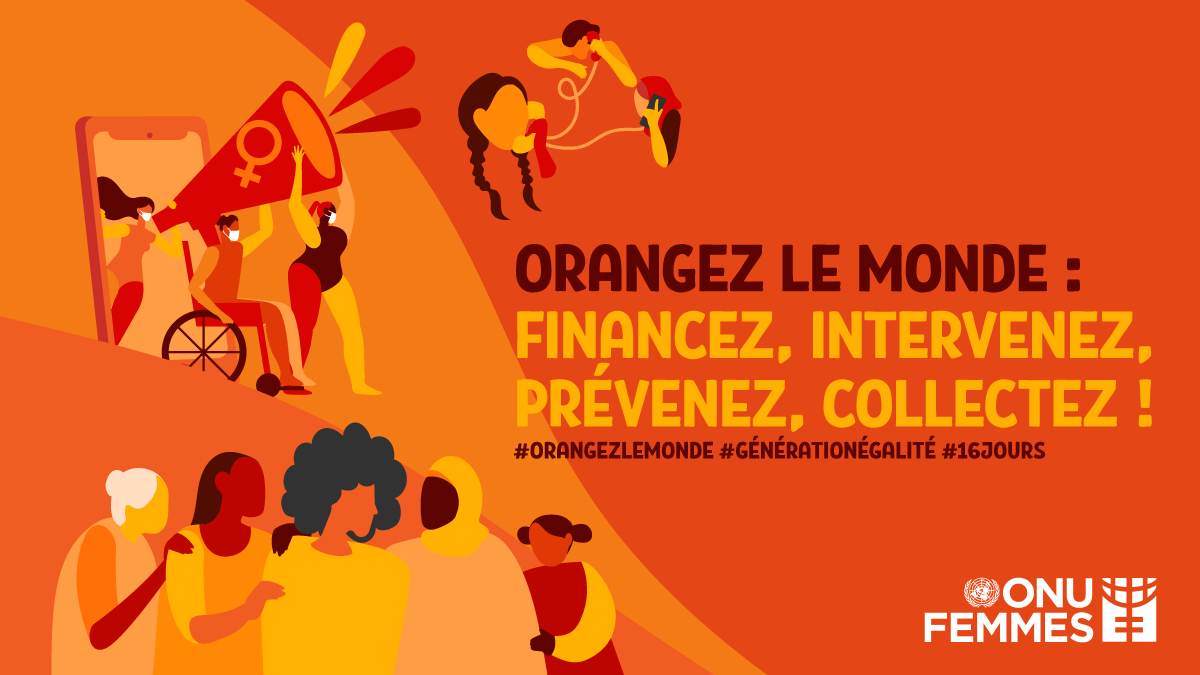 For the annual international campaign “16 Days of Activism” against gender-based violence, the United Nations once again called to “Orange the world”. From November 25 to December 10, the challenge was to fill the funding gap and to collect the data necessary to adapt and improve support services provided to women and girls. Through the slogan “Fund, Respond, Prevent, Collect!”, various issues were addressed throughout this campaign by humanitarian and development actors.

As the 16 Days of Activism is today coming to an end, Action for Development asks: what do we know about gender-based violence in Afghanistan? 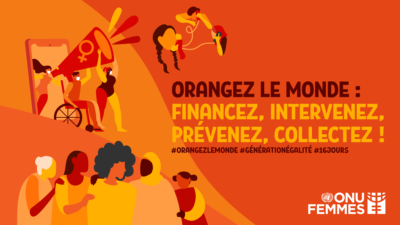 This year, the “16 Days of Activism” campaign had a special resonance in the context of a global pandemic but also as Afghanistan continues its peace negotiations, started in September, after twenty years of continued conflict. This annual event was all the more symbolic given that October 2020 marks the twentieth anniversary of the adoption of Resolution 1325 by the United Nations Security Council. This resolution enshrined, for the first time, the essential role of women in the prevention and resolution of conflicts and peace negotiations. In addition, the “16 Days of Activism” plays its part in the continuation of the UN Sustainable Development Goals (SDGs) and its “2030 agenda”, the principles approved by Afghanistan in 2017. This agenda sets 17 goals of sustainable development for the planet, which include gender equality. At the launch of the campaign against gender-based violence, Amnesty International however recalled:

“After spending two decades working hard to win the most basic rights, Afghan women now face the real possibility that this progress will be sold off in negotiations. Women’s rights must not regress as part of the peace process – the human rights of Afghans, especially women and girls, must be at the heart of any possible agreement” said Samira Hamidi, Officer campaign on Afghanistan for Amnesty International.

What is gender-based violence in Afghanistan?

For the “16 Days of Activism” campaign, UN Women provided a complete lexicon of key concepts to understand the different types of gender-based violence such as: violence against women and girls, domestic violence, femicide, sexual violence, human trafficking, female genital mutilation or child marriage. In light of these distinctions, what about gender-based violence in Afghanistan? And how is it apprehended?

“Most manifestations of violence are underreported in the context of a patriarchal and conservative society where domestic violence is not always perceived as a crime and is condoned by authorities that attribute the abuse to a woman’s alleged disobedience of her husband.” Report of the Special Rapporteur on violence against women, its causes and consequences, Rashida Manjoo.

While the data are therefore difficult to collect and analyze, certain figures provided by international organizations, NGOs in the field and governments, provide an overview of current issues. In the same report, from 2014, it was estimated that up to 87.2 per cent of women have experienced at least one form of physical, sexual or psychological violence, or forced marriage.

More than 60 per cent of women experience multiple forms of violence. A total of 4,505 cases of violence against women were registered by the joint database of the Ministry of Women’s Affairs, Ministry of Interior and the Attorney General’s Office from March 2012 to March 2013 in 32 provinces. 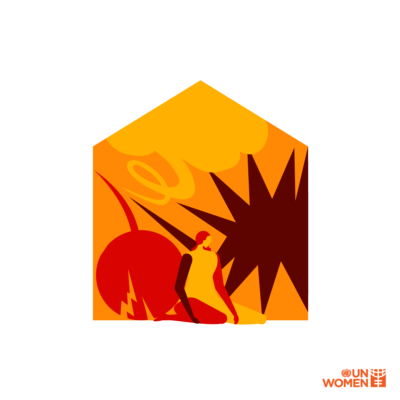 The report also shows that in the first half of 2013, the Afghanistan Independent Human Rights Commission registered 4,154 cases of violence against women, including 1,249 cases of physical violence, 976 cases of psychological violence, 862 cases economic violence, 262 cases of sexual violence and 805 cases of other types of violence. Recalling that in the context of marriage, rape remains rarely recognized or reported because women do not have the freedom to decide whether or not to have sexual intercourse with their husbands.

For its part, Oxfam recently highlighted the responsibility of the police in some of those violences. According to the organization, “in Afghanistan, 87% of Afghan women have experienced some form of violence, and the Afghan Independent Human Rights Commission reports that nearly 15% of honour killings and sexual assaults carried out against women in the last two years were by the police”.

The year 2020, synonymous with a global pandemic that has spared no country for nearly a year, has everywhere exacerbated social, economic, psychological, gender disparities and inequalities. But the COVID 19 crisis has also given rise to new forms of issues.

Before the pandemic, 87% of Afghan women had therefore been exposed to some form of violence during the past year. An Oxfam report later found that 97% of women surveyed had experienced an increase in gender-based violence since the COVID19 outbreak. Showing that confinement, restrictions on movement and increasing unmeployement are indeed factors that aggravate domestic violence. 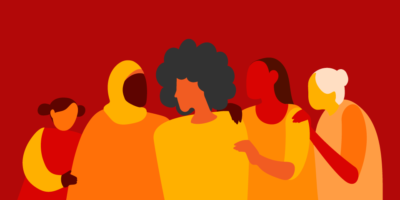 On the same line, in April 2020, the British newspaper The Guardian, questioned the resurgence of domestic violence at a time of lockdown in Afghanistan. In the article Marzia Akbari, a 25-year-old psychologist from the city of Herat, in western Afghanistan, said: “ Women in Herat may survive coronavirus but not lockdown”. The town has some of the highest rates of domestic abuse and female suicide in Afghanistan. While the United Nations estimates that more than 50% of Afghan women would be victims of domestic violence in their lifetime, the practitioner estimated that in Herat, almost every woman has been beaten or hurt in her own home.

She also recalled that in the context of the COVID19 crisis, a lot of social infrastructures had been mobilized for health reasons, and that now she “can barely make contact with 25 women” over her 50 usual patients. Changes that disrupt access to support centers and increase the danger for these victims of violence.

“The building we used for providing mental health support was turned into an isolation centre of patients with coronavirus about a month ago. We tried to relocate to another place but the only reason women could manage to reach us before was because the counselling centre was based at the local hospital. Many of their families didn’t know these women were seeking counselling, they thought they were attending a medical appointment”.

The testimony of Waheeda Payenda, head of the FRU’s Family Response Unit (FRU) in Parwan province, collected by UNFPA, furthermore reveals that very often “because the women didn’t know they have the right to complain against their perpetrators and seek justice they remained in the same situation”.

In her testimony, the head of the FRU corroborates the importance of access to support and assistance services in dealing with cases of domestic violence.

The murder of ex-journalist and feminist, Mina Mangal, last year also sparked outrage. Deputy Shagufa Noorzai then wished to recall the last femicides in Afghanistan: “Farkhunda was burned alive, Baby Mahsa was kidnapped, raped and killed, Bibi Ayesha had her nose cut off, women are stoned and today Mina Mangal was shot nine times ”. According to Thomson Reuters Foundation, Afghanistan is the second most dangerous country in the world to be a woman. 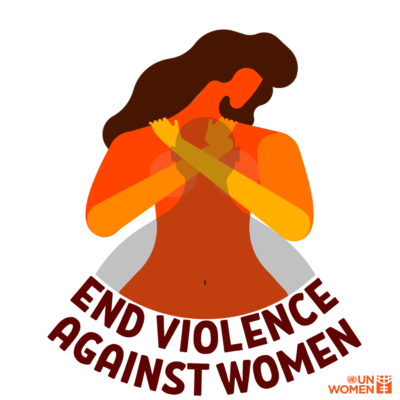 In addition, according to an official Afghan investigation cited by the UNODC, 243 cases of honor killings were recorded between April 2011 and August 2013.

On June 8, 2019, the Fédération Internationale de Football Association (FIFA), the world’s governing body for football, reacted and handed a lifetime ban. The next day, the Afghan Attorney General issued an arrest warrant for Keramuddin Karim. However, he has yet to be arrested, while most of the accusers have reportedly left Afghanistan after receiving threats.

The UN’s guide to types of gender-based violence for the “16 Days of Activism” also includes human trafficking, female genital mutilation and child marriage. In a large study carried out by IOM in 2008, “Female victims, trafficked for the purpose of forced prostitution, are currently criminalized and imprisoned. Victims must be exempted from prosecution and imprisonment. Appropriate protection has to be given to victims so that they can cooperate with law enforcement authorities for the investigation and court proceedings. (Ministry of Interior, Prosecutor’s Office, Judicial Bodies). Female victims are often unable to seek the assistance that they need, due to social stigma attached to sexual exploitation”.

Since then, in September 2019, Afghanistan joined the UNODC Joint Initiative against Human Trafficking and Smuggling of Migrants. This GLO.ACT aims at protecting victims and migrants vulnerable to trafficking and end the impunity of traffickers and smugglers, which benefit from the exploitation of mostly vulnerable people. 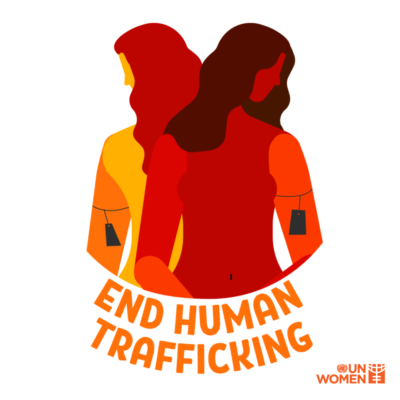 As for child marriage, Girls Not Brides, declares that 28% of Afghan girls are married before the age of 18 and 4% are married before their 15th birthday. Afghanistan has the 20th highest absolute number of women married or in union before the age of 18 in the world. The majority of teenage pregnancies occurs within marriage. While childbearing can take place right after marriage, girls can be married off to avoid the social stigma of premarital sex and childbirth outside of marriage.

However, Afghanistan has pledged to end early and forced child marriage by 2030, in line with target 5.3 of the Sustainable Development Goals (SDGs). During its voluntary national review at the 2017 High-Level Political Forum, the government stressed that it is working to reduce the number of girls who marry before the legal age to 10% by 2030. The Afghanistan ratified the Convention on the Rights of the Child in 1994, which sets the minimum age for marriage at 18.

There is currently no data on female genital mutilation in Afghanistan.

International Day For Street Children – The reopening of the education centers